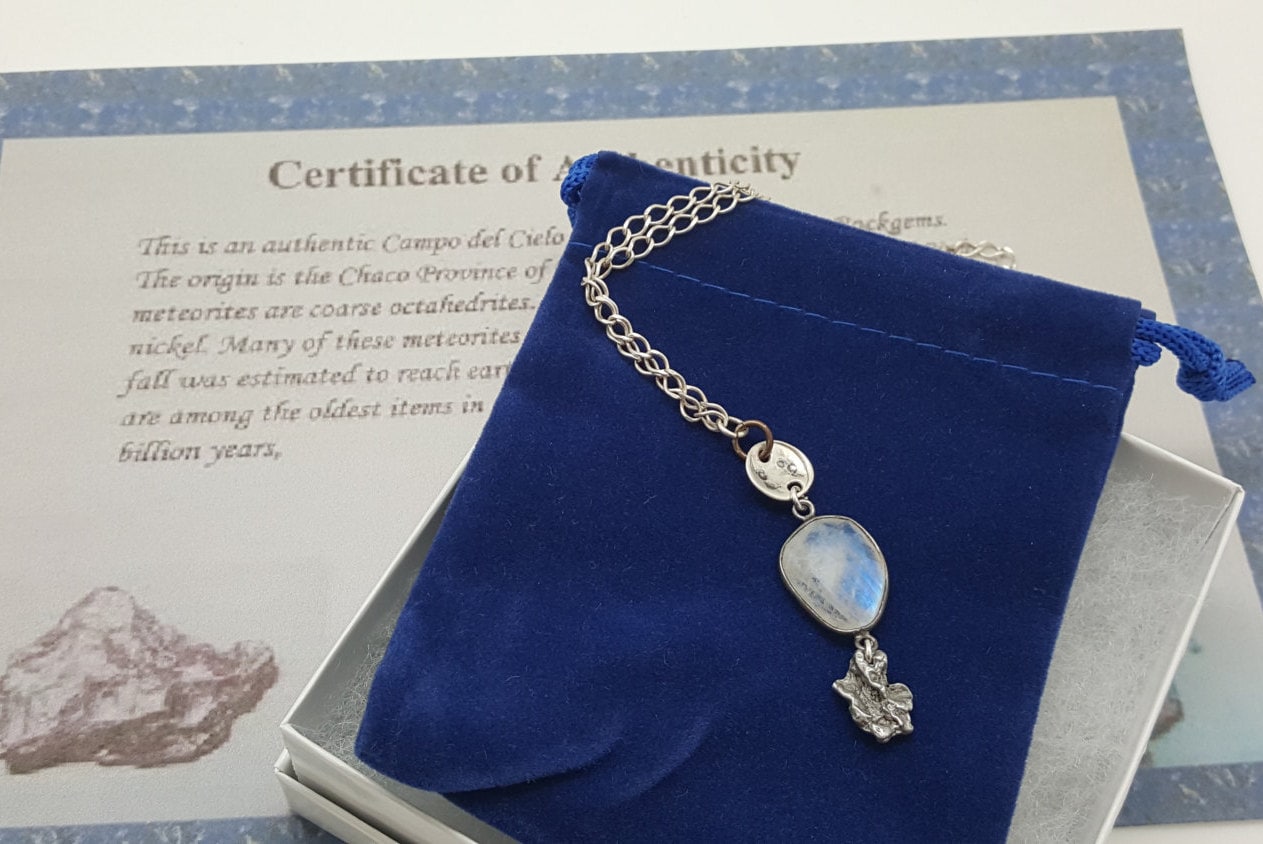 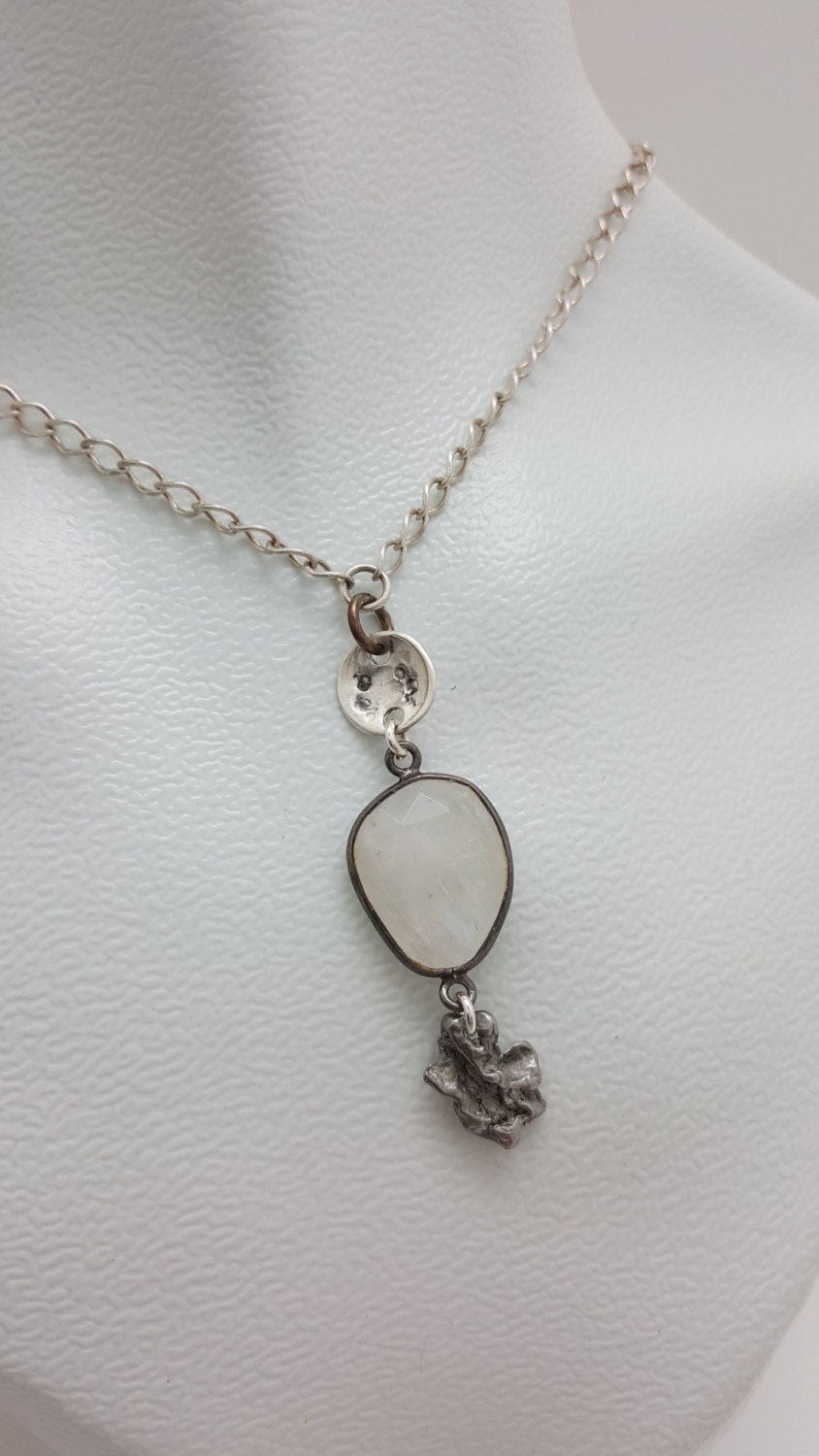 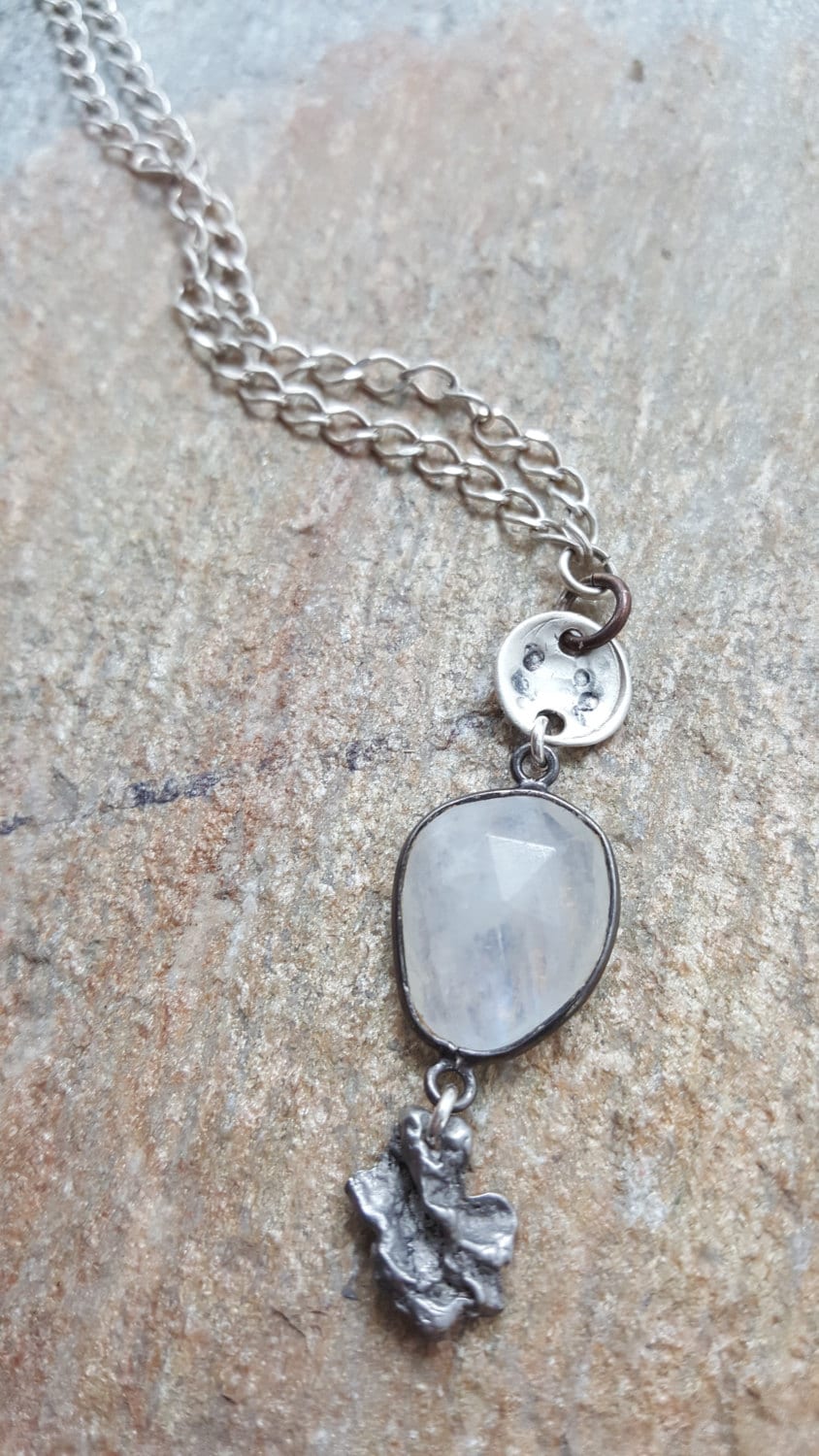 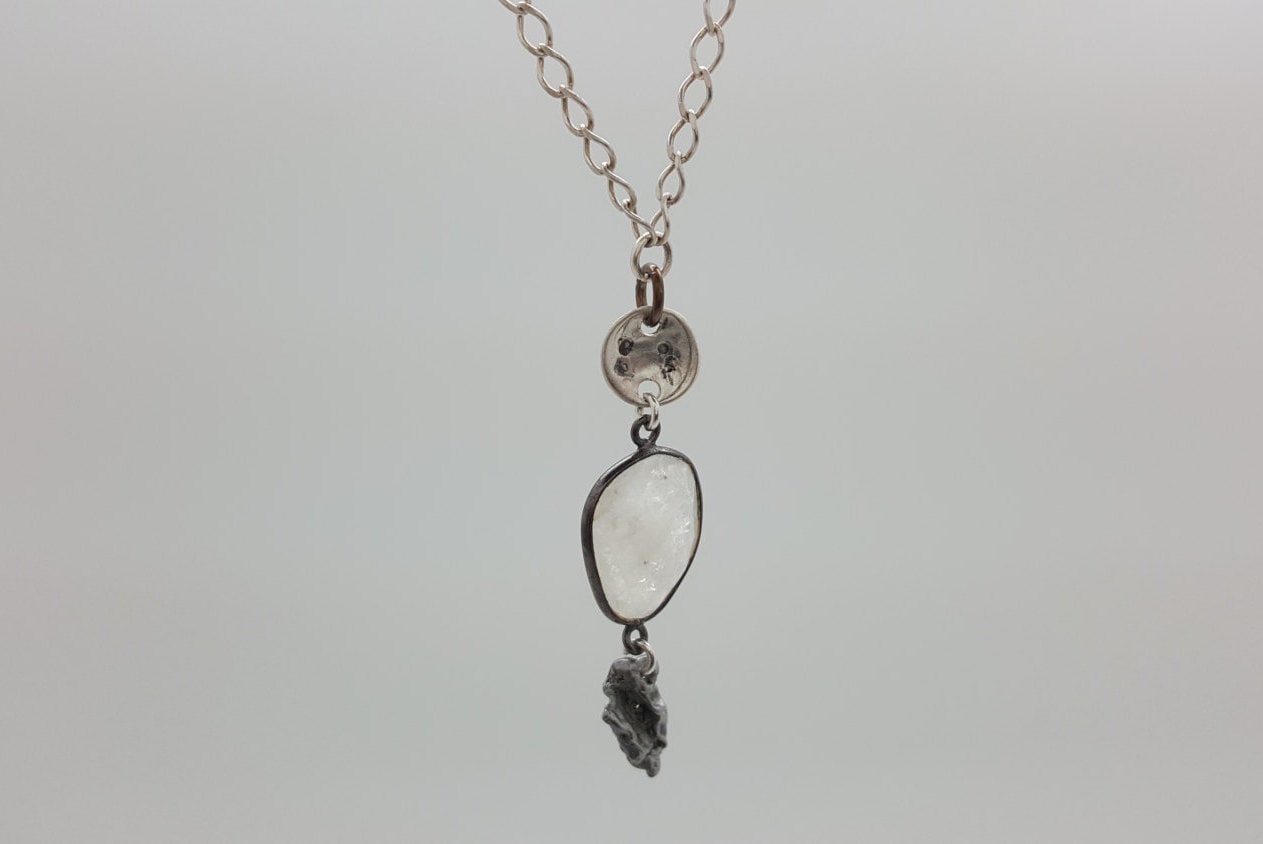 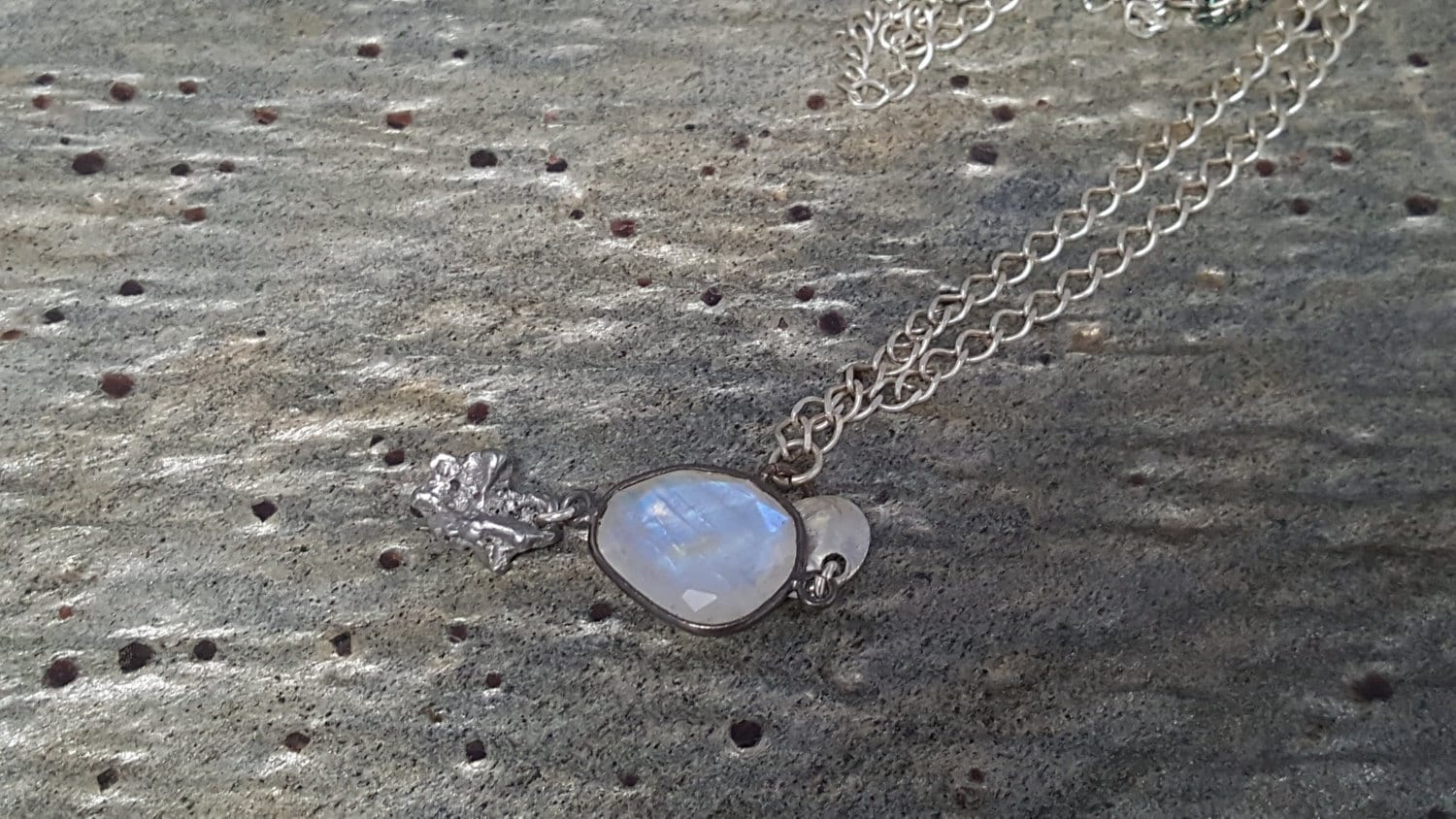 This organic shaped Meteorite and Moonstone necklace is a play off of past, present and future.
The question is....which stone represents which stage?

Although this necklace might appeal to the dreamer in us all it is balanced enough to be worn day or night.
Casual or a smidge fancy.
Perhaps a "SOMETHING BLUE" to complete a romantic brides wedding day look...


Attention to detail has been given to ensure the Campo Del Cielo Meteorite ( in english Campo Del Cielo means Fields of Heaven ) is smooth but still showcasing it's magical organic aesthetics.
There is great movement to the entire necklace and a true electric "fire" in the moonstone.

I can honestly and sincerely say that all things I make I make with love and thoughts about the enjoyment and comfort of it's future home. Whether it's a one of a kind or a item made by the hundreds I care equally.

FUN information about materials used in this piece

A meteorite is a bright streak of light in the sky, often referred to as a "shooting star" or "falling star" and it is simply material or Meteors from the solar system falling to Earth. Once it hits the ground it is only then called a meteorite

The meteorite used in this necklace is a Campo Del Cielo

Ten Facts About Meteors
1. A meteor shower occurs when the Earth passes through the trail of debris left by a comet or
asteroid.
2. Meteors are bits of rocks and ice ejected from comets as they move in their orbits about the
sun.
3. A meteor that reaches the ground it is called a meteorite.
4. Meteor showers get their names from the constellation in where their radiant is located.
Perseids come from Perseus, hence the name Perseids.
5. Comets continuously eject material with each passage around the sun; this replenishes the
shower meteoroids.
6. Approximately 30 meteor showers occur each year that are visible to observers on Earth. Some
of these showers have been around longer than 100 years. For example, the Perseid meteor
shower, which occurs each year in August, was first observed about 2000 years ago and
recorded in the Chinese annals.
7. Meteors are sometimes observed with red, yellow or green trails. The colors are caused by the
ionization of molecules - like oxygen which appears to be green.
8. A fireball is a meteor that is brighter than the planet Venus.
9. Radar indicates there are 12,000 meteors on a given night that are about the size of a piece of
dust.
10. The International Space Station has shielding to protect it from meteors up to an inch wide.

Moonstone
As ancient as the moon itself, Moonstone holds the power of mystery. Its secrets are locked beneath a pearly veil, and with them, our own hidden truths. Only within its reflected light can we begin to understand what it has to teach us. Moonstone is foremost a talisman of the inward journey, taking one deep into the self to retrieve what is missing, the parts of the soul left behind or forgotten, then brought to light. [Simmons, 267]

Since earliest times, Moonstone has been a tangible connection to the magic of the moon - an amulet of protection for travelers, a gift of lovers for passion, a channel for prophecy, and a path to wisdom. Our ties to the moon are strong. As it waxes and wanes in cyclic perfection, it creates the tides and rhythms of our mother, Earth, and influences our behaviors, emotions and spiritual growth. Moonstone calms and encourages, teaching us the natural rhythms of life.

Moonstone has been used in Roman jewelry for nearly two thousand years, even longer in the Orient. It has always been a sacred stone in India with a special significance for lovers, and is a traditional wedding gift there. It was a popular choice for jewelers in the Art Nouveau period, and in Europe was believed to reconcile estranged lovers and to cure sleeplessness. Moonstone is known as the Traveler's Stone for the protection it affords, especially at night, and because of its uplifting quality of hope, has long been worn as a talisman to enhance the personality. [Ahsian, 267][Mella, 91]

Named for its moon-like sheen, Moonstone is a Feldspar mineral exhibiting a soft, watery opaqueness and a silvery-white reflection called chatoyancy that moves as a line across the surface as light varies. Moonstone occurs in delicate shades of peach, blue, gray, white and a prismatic variety known as Rainbow Moonstone. In addition to the general properties of all Moonstones outlined in this article, the following crystals have additional focuses.

Legendary as the Traveler's Stone, Moonstone is especially protective of those who travel by night or upon the water when the moon is shining. Frequent travelers should keep one in the glove compartment for safe night driving and as protection against road rage. [Mella, 91][Eason, 42]

Moonstone opens the heart to nurturing qualities as well as assisting in the acceptance of love. It is an excellent crystal for first or new love, and is a comforting talisman if love must be kept a secret. It was also believed to be able to reunite loved ones who had parted in anger. [Mella, 91][Eason, 43]

Moonstone is also the stone of love and eroticism, stimulating the kundalini energy and carnal desires. It is the ultimate fertility crystal. A Moonstone necklace worn during lovemaking at full moon harmonizes the body into the natural lunar cycle. [Megemont, 128][Eason, 145] Or, for fidelity or fertility, make a grid of thirteen Moonstone crystals with a circle of the twelve months around a bedroom, and one centered under the bed. [Eason, 40]

As a professional support stone, Moonstone aids dancers and artists in their self-expression, inspires the heart and feeling in executives, and helps educators in sharing activities. It enhances self-acceptance in waiters and waitresses, and promotes sensitivity in psychologists and secretaries. [Mella, 129-133]

Peach Moonstone is particularly consoling to anyone who feels helpless because of weight problems, and should be worn to encourage one to love and value themselves for who they are, as is, and to assist in separating food from emotional needs