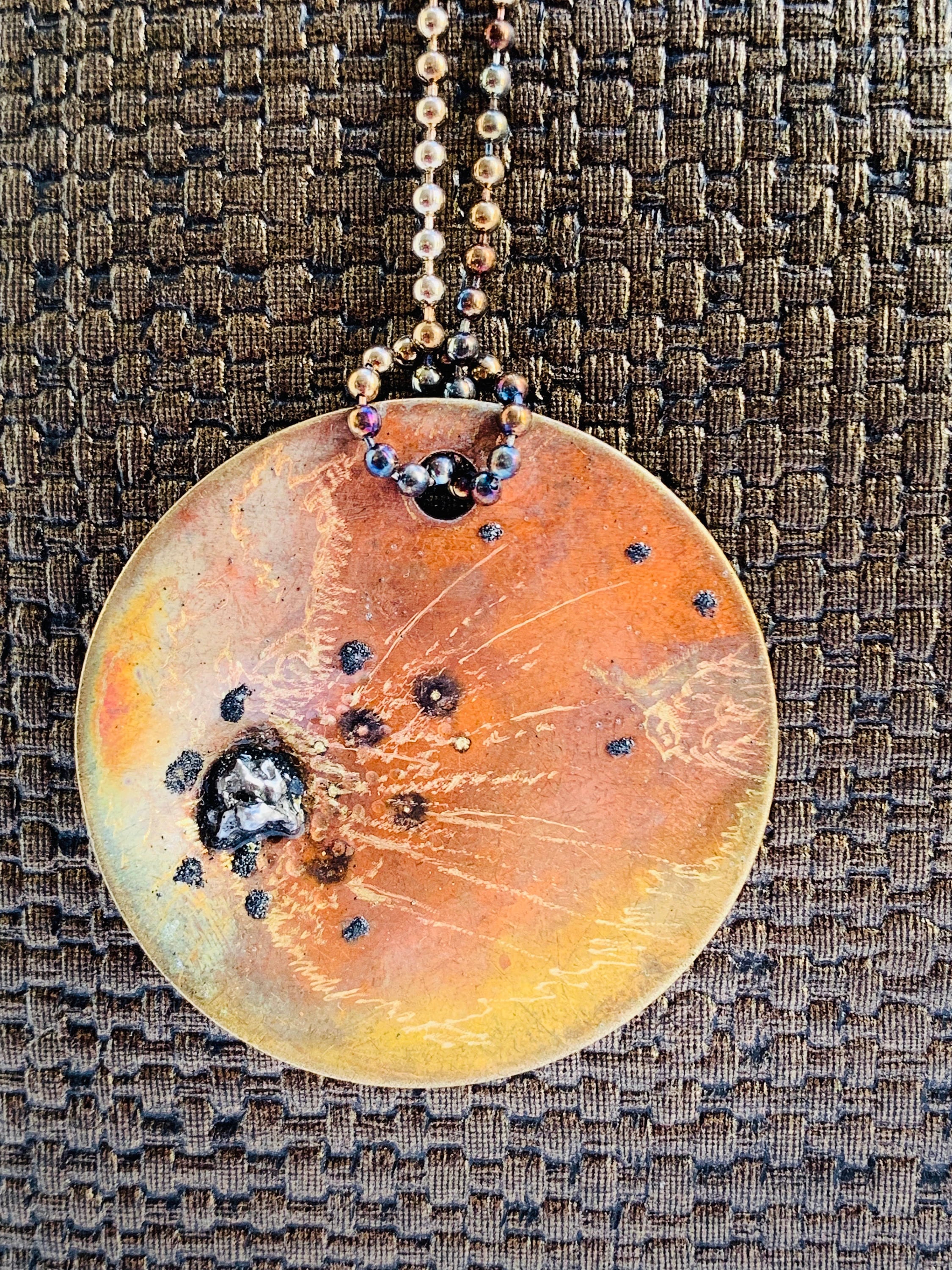 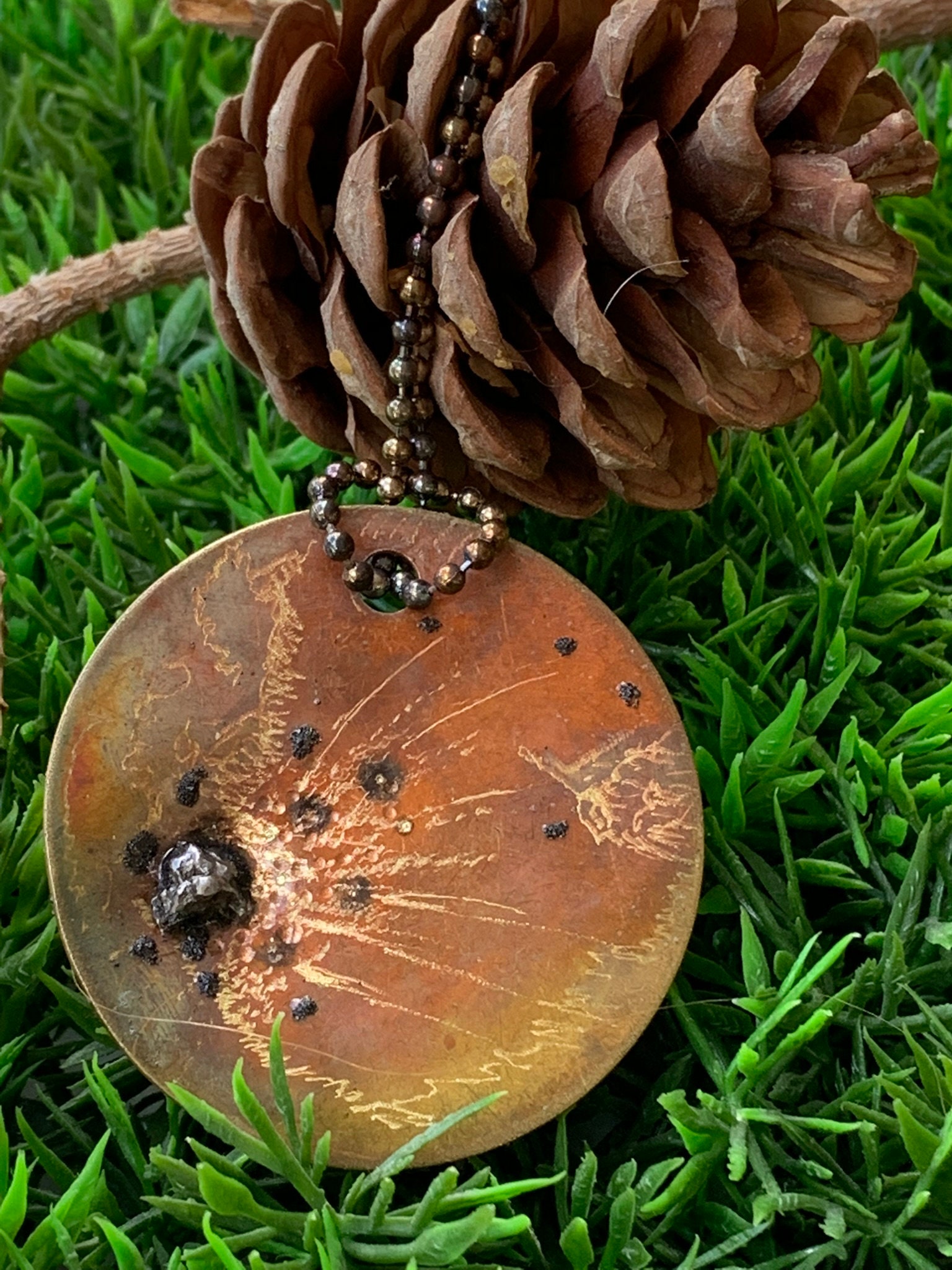 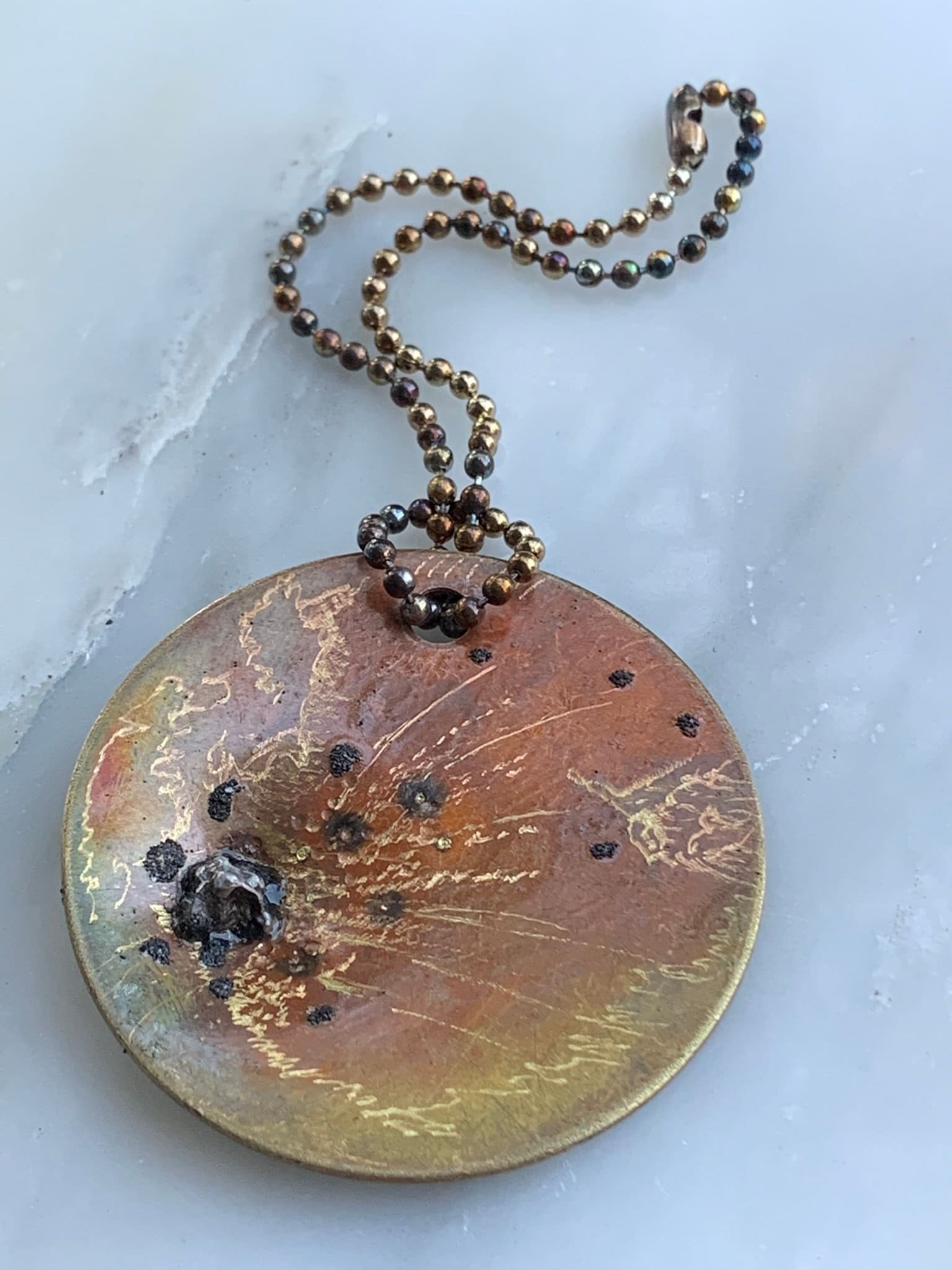 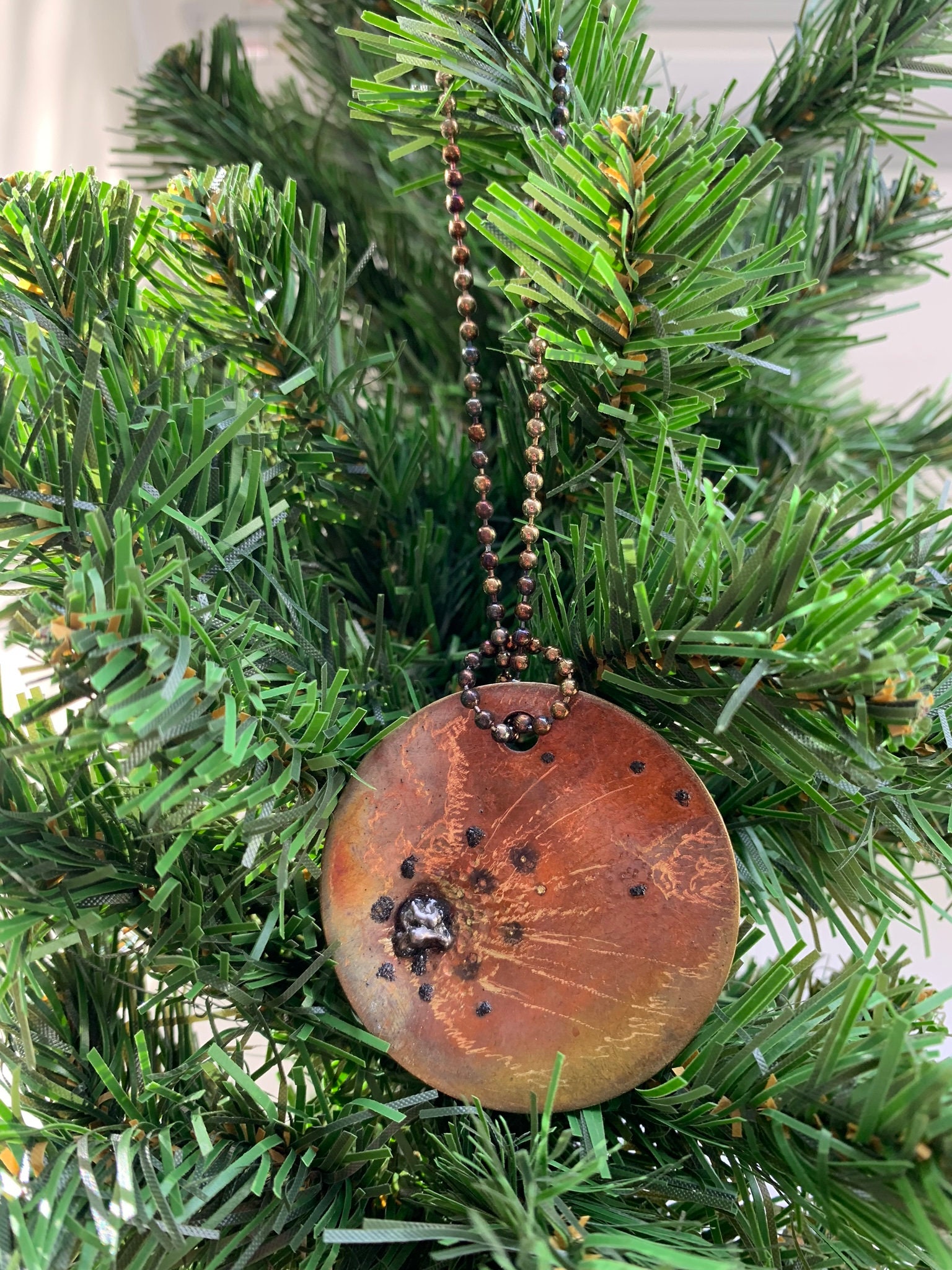 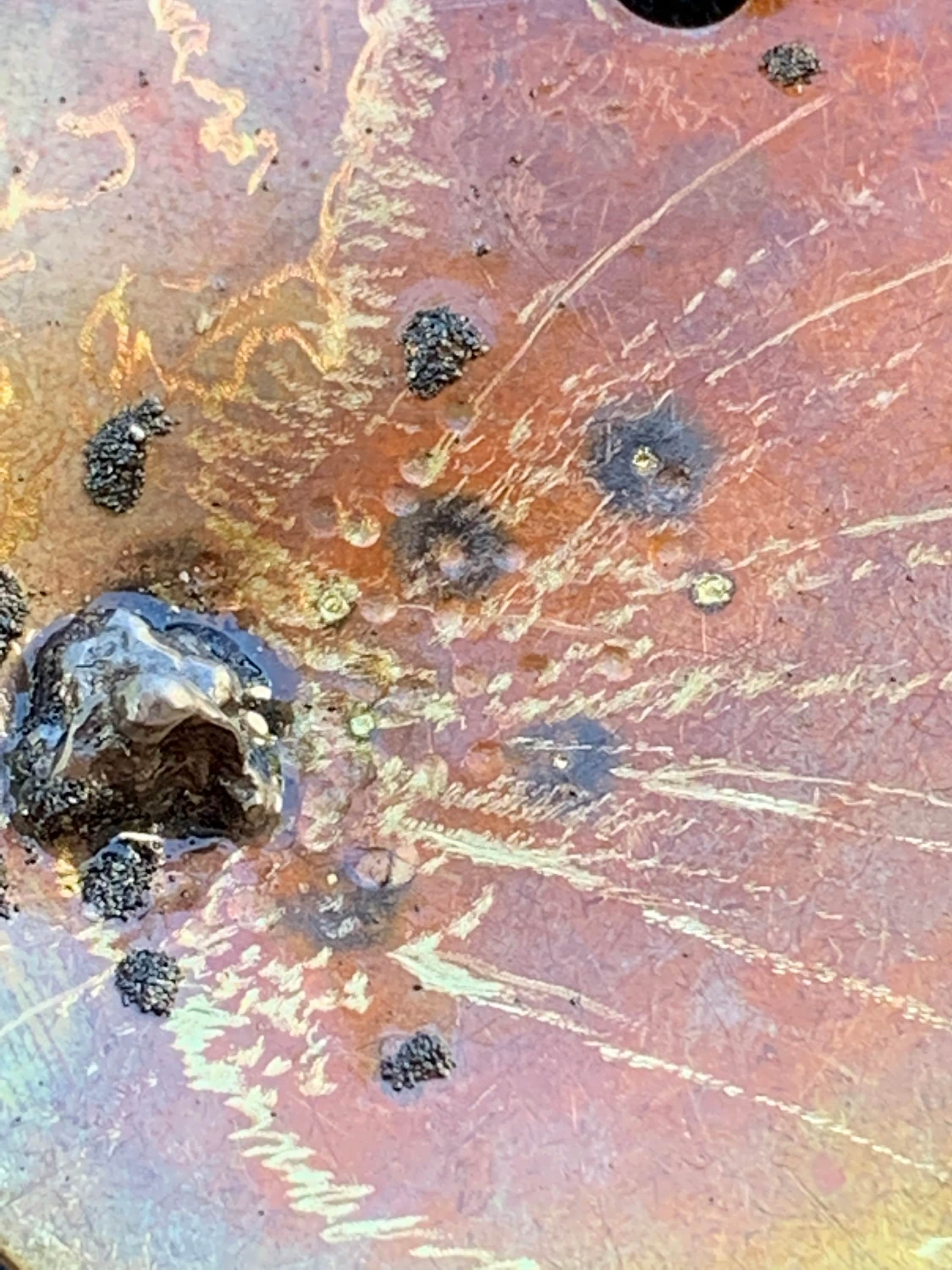 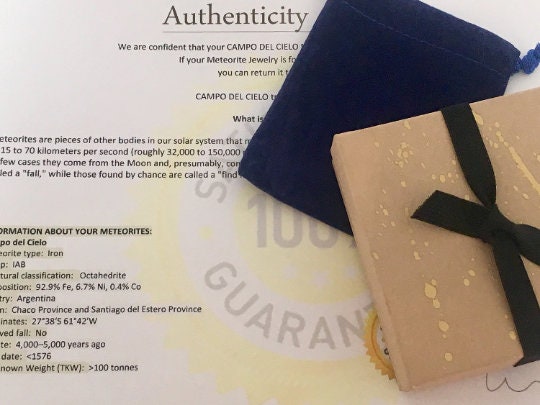 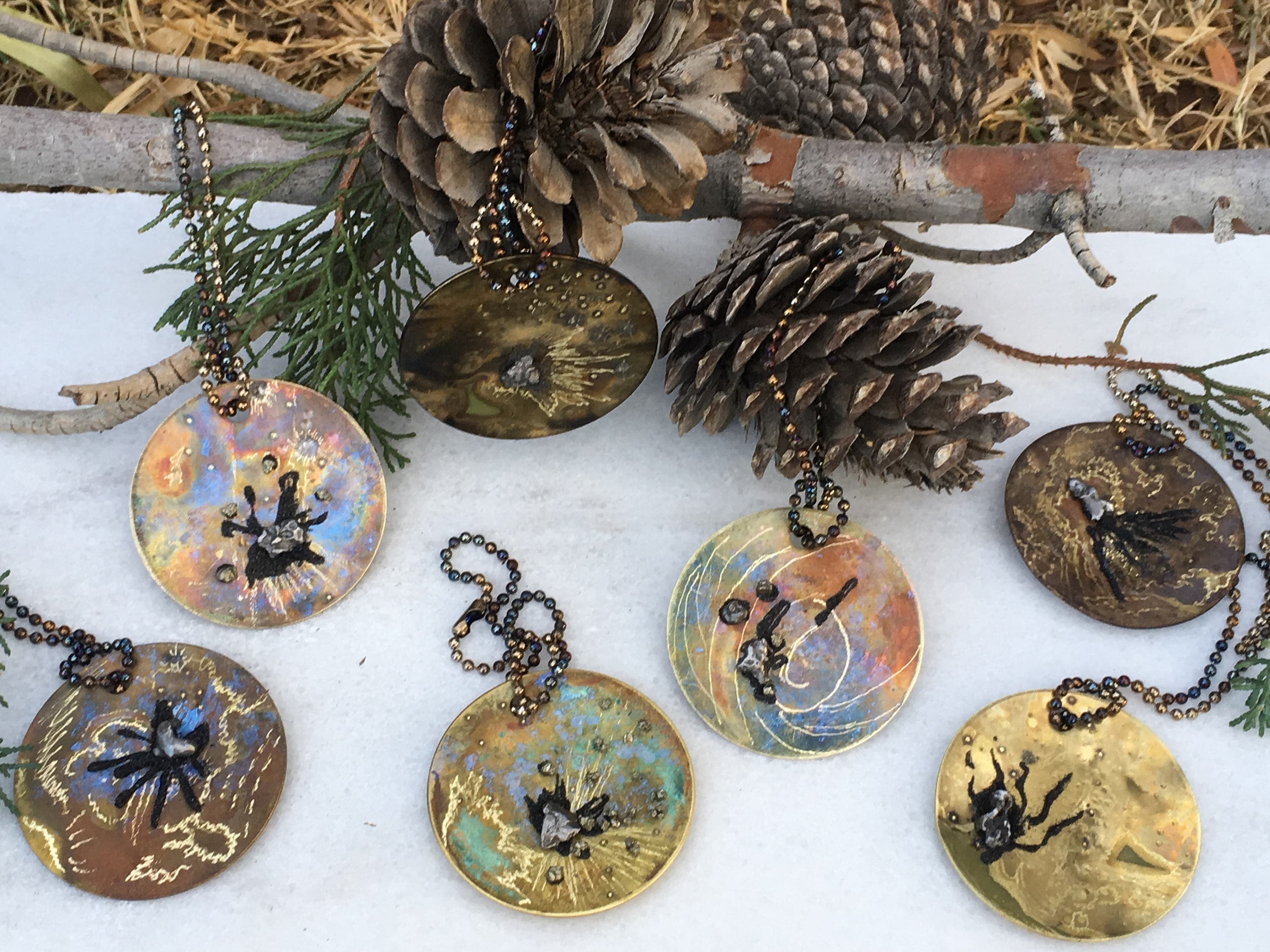 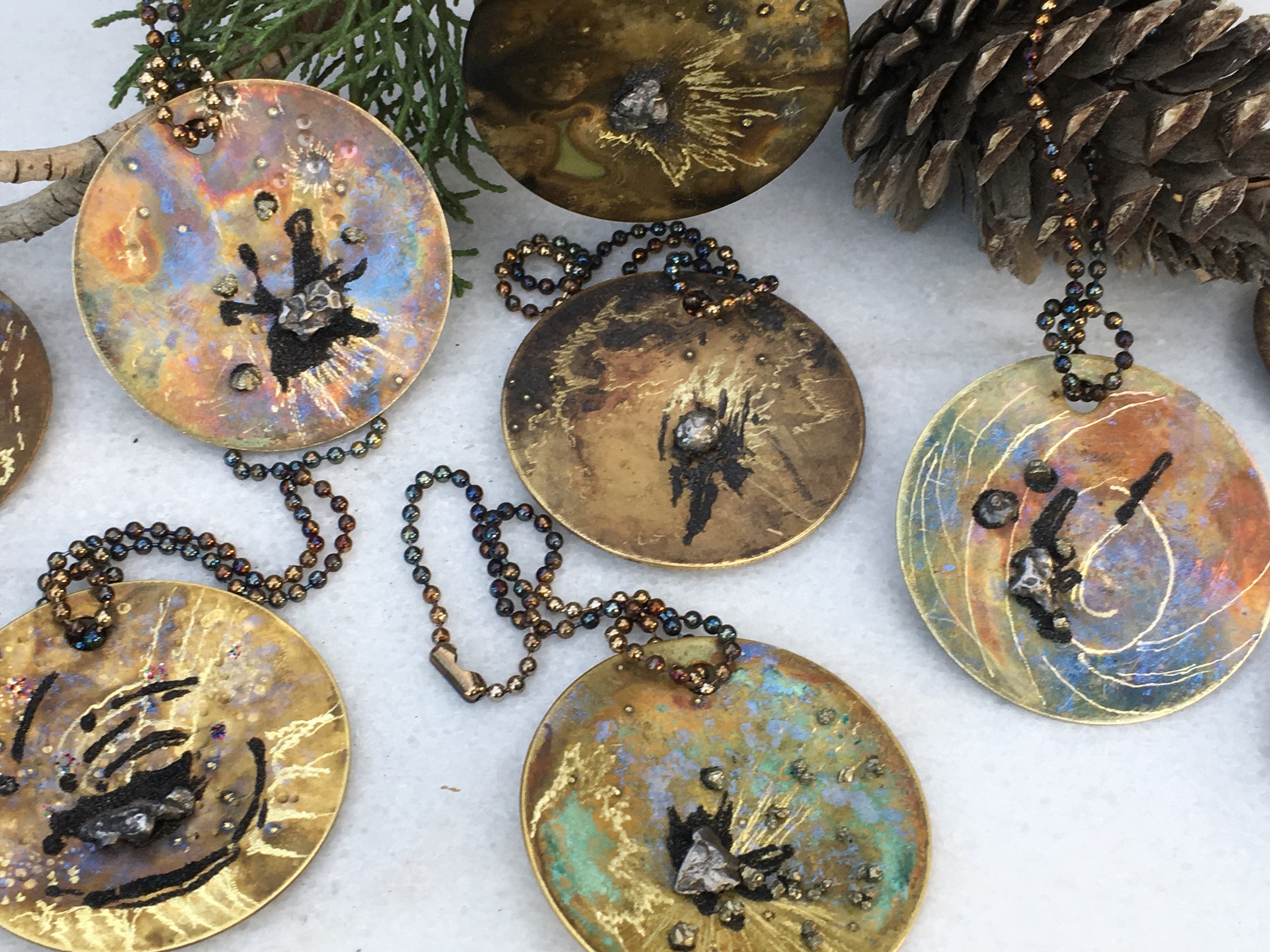 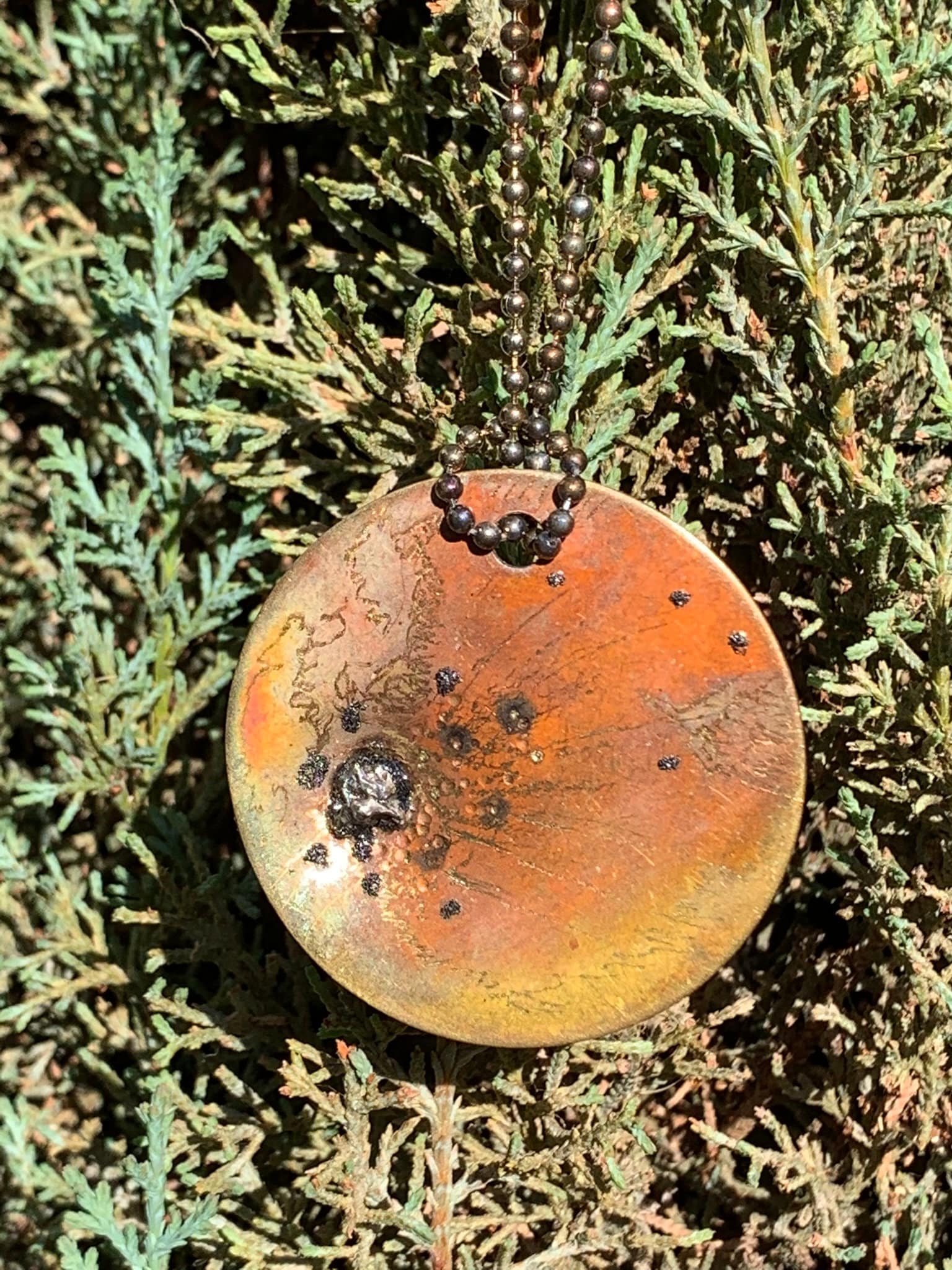 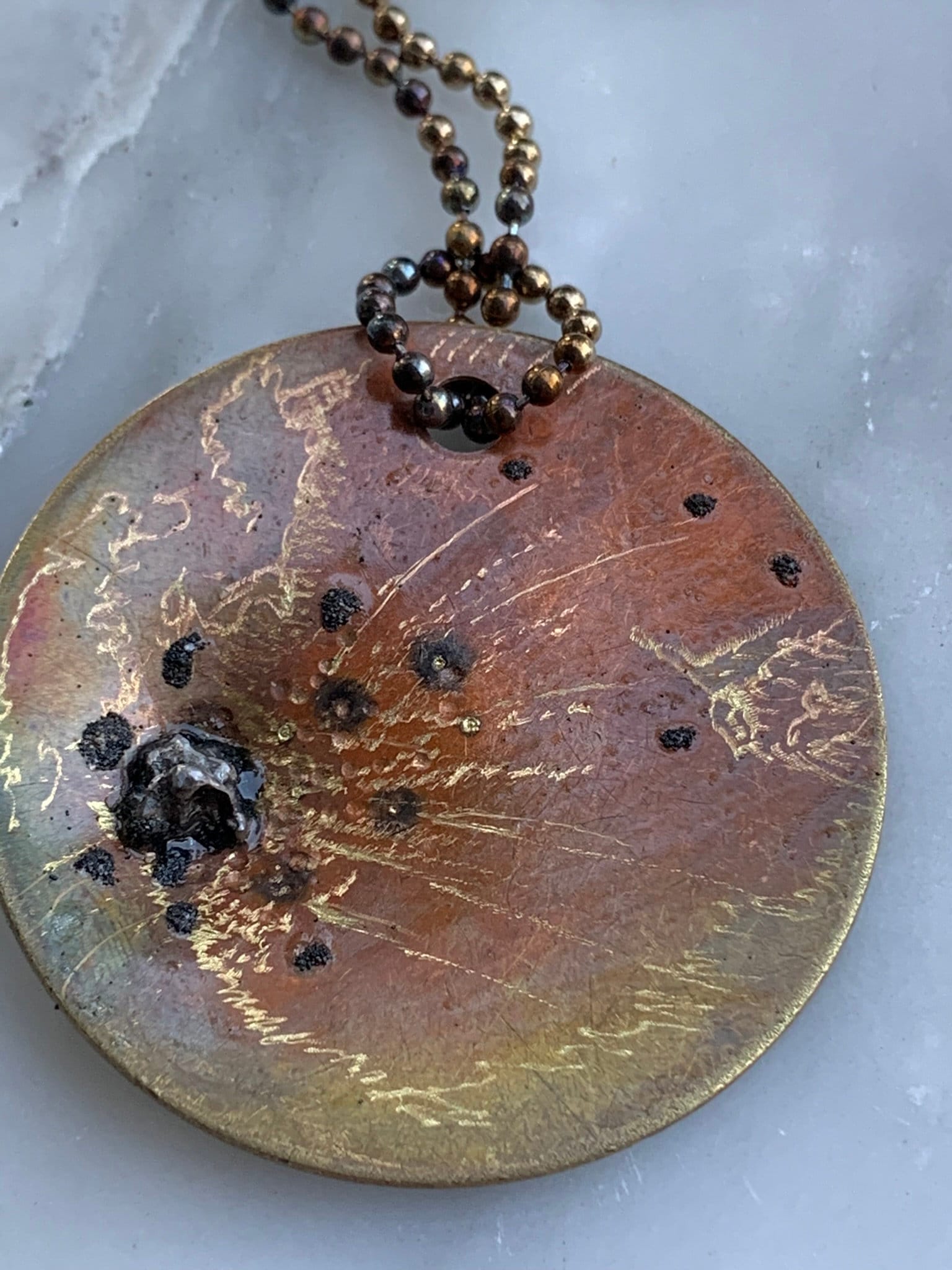 Unique Christmas Ornaments don't get much cooler! METEORITES for Boyfriend Christmas Gifts! My Handmade Christmas Ornaments are made with Meteorites and Brass. Just as the Meteorite Keychains and Money Clips I etch, patina, color heat, acid etch, chase and Repoussé the Brass. I have heat colored the ball chain to add a little Christmas Festive BLING.

This is a Black Friday Sale and Cyber Monday DEAL! EXTENDED SALE!!!

To me each piece of metal tells a story. Each piece needs a particular meteorite. I love making these. This is a new creation made for the holidays. I am able to personalize.
HOWEVER please note that I hand etch. I do not use a template or an engraving machine. So, if you are happy with a free spirit free form I am happy to do that.
Please message me about it. Please note that each one will vary as they are all hand made.

If you would like to purchase quantity please let me know and I will create a listing for you with a DISCOUNT.

*Please note that each ornament is unique and different. You are purchasing the ornament that you see in the first few photo's.

Details:
2" round Brass
Campo del Cielo Meteorite
Black Magnetite Sand
Pyrite (some)
3" Heat colored steal ball chain
AS ALWAYS all meteorite creations come with a signed artist certificate of authenticity that gives you details and information about the type of meteorite that you now have.
As well Gift packaging and velvet pouch.

WE ARE ALL Made of STAR STUFF! Carl Sagan

Facts about Meteorites in General....

Meteorite falls, also called observed falls, are meteorites collected after their fall from space was observed by people or automated devices. All other meteorites are called "finds".

As of June 2012, there are about 1,103 documented falls that are listed in widely used databases, most of which have specimens in modern collections.


There are 4 official classifications of meteorites types:

Chondrites - Chondrites are stony (non-metallic) meteorites that have not been modified due to melting or differentiation of the parent body. They are formed when various types of dust and small grains that were present in the early solar system accreted to form primitive asteroids. They are the most common type of meteorite that falls to Earth with estimates for the proportion of the total fall that they represent varying between 85.7%[3] and 86.2%

Achondrites - An achondrite is a stony meteorite that does not contain chondrules. It consists of material similar to terrestrial basalts or plutonic rocks and has been differentiated and reprocessed to a lesser or greater degree due to melting and recrystallization on or within meteorite parent bodies. Achondrites account for about 8% of meteorites overall.

Pallasite or Stony-Iron - Pallasite is a class of stony–iron meteorite. It consists of centimeter-sized olivine crystals of peridot quality in an iron-nickel matrix.

Iron - Iron meteorites that consist overwhelmingly of an iron–nickel alloy known as meteoric iron that usually consists of two mineral phases: kamacite and taenite. Iron meteorites originate from planetary cores of planetesimals. The iron found in iron meteorites was one of the earliest sources of usable iron available to humans, before the development of smelting that signaled the beginning of the iron age.

Meteorites are rare with unique properties and are held as sacred in many cultures. Meteorites unlock their uniqueness as they attune to Earth and keeper energies.

When meditating with a Meteorite visions and information may be given that does not fit with human existence, seemingly otherworldly in content and enlightened in feeling.

China considered meteorites to be sacred stones from the Heavens, and the Kaaba at Mecca is a meteorite revered by the Moslems for centuries. Some regard meteorites as helpful tools for communication with alien intelligences and distant planets. Meteorites can be used as a symbol of endurance based on their long travel and mode of entry into our world. Walk-ins or Star-seeds may find meteorites useful as a stabilizing influence in their “new environment.” It may also be useful in helping people get in contact with past lives on other worlds.

Ancient Artifacts and Meteorites :
Scientists: Meteorite Beads Oldest Example of Metalwork
After a century of uncertainty, researchers have confirmed that the iron used to weld 5,000-year-old Egyptian beads fell from the sky—in the form of a meteorite, that is.

The nine small beads were excavated in 1911 from a tomb in Gerzeh, an ancient cemetery in northern Egypt. Early chemical testing showed traces of nickel, leading scientists to believe they were made from meteoric iron.

The beads were prized as exotic artifacts, strung together on a necklace with precious minerals like gold and carnelian. (Related: "Oldest North American Rock Art May Be 14,800 Years Old.")
http://news.nationalgeographic.com/news/2013/13/130822-ancient-egypt-beads-meteorites-iron-gerzeh/

Egyptian[edit]
Ancient Egyptians referred to iron as "Copper from the Heavens" because their lack of smelting technology limited their accessible iron supplies to what little native iron they could recover from meteorites. Despite iron's rarity, they gained enough familiarity with ironworking techniques to have used wrought iron in the manufacture of swords and blades as early as 3000 BC. They exported this technique to Assyria, Babylon and Greece through trade and as they conquered other lands and were conquered themselves.
https://en.wikipedia.org/wiki/Bladesmith


Notes about my process:

My process of shaping and smoothing is very labor intensive and particular. I look at each meteorite and it's unique qualities before I set about shaping. I feel it's important to showcase natural aesthetics of the meteorite while translating it into wearable art. Personally it is important to me that the meteorite still look like a meteorite to be a talking piece and give the wearer a special connection to the "great beyond"

Meteorites get EXTREMELY hot. To keep a meteorite "stable" you can not use coolants. So my process must be slow and I will work on many meteorites at the same time as I must put each one aside several times to cool off.